Doonagore Castle is Doolin’s iconic tower house castle on the hill overlooking Doolin Point.  This is used as one of the navigational points for boats approaching Doolin pier. This castle is now in private ownership and its lucky owners have one of the most coveted views in Ireland, looking down over Doolin Point and the Aran Islands and beyond Clare to the Connemara hills.

Doon – or Dún – is Irish for Fort, and the name could mean “the fort of the rounded hills” or the “fort of the goats“ (gabhar, pronounced gawar, is Irish for goat.)
There are said to be over 3,000 tower house remains in Ireland, built throughout the fifteenth and sixteenth centuries. The earliest ones were built by the Normans. The construction of the tower house castle reflected the turbulent times in which people lived, and all incorporated certain features which were primarily for defence. Of course the more lowly members of society had to take their chances in the countryside though some would have been able to gain refuge in the tower house bawn.
The ‘bawn’ is the area contained by a perimeter wall that surrounds the tower house. Here also the cattle would have been taken if an attack was anticipated. The bawn around Doonagore is still intact and the gate is in view to the left of the base of the tower. 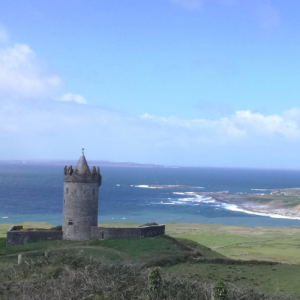 The O’Brien’s and the O’Connors are two of Co. Clare’s strongest clans. Doonagore was founded by an O’Connor (by the grand name of Teigue MacTurlough MacCon) in the 14th century. The current tower house structure dates back to the 16th century, and it was granted to an O’Brien (Turlough) in 1582.
In 1588, during the retreat of the Spanish Armada from its failed attempt to invade England, 170 survivors of a Spanish shipwreck were caught by the high sheriff of County Clare, Boetius MacClancy. They were hanged at Doonagore Castle and buried in a barrow near Doolin called Cnocán an Crochaire.
The Gore family arrived in Clare in 1653 and Counsellor Gore repaired it in the early 1800′s. By 1837 it had fallen into disrepair and was described in that year as being a round tower on a square base.

Doonagore Castle was bought and restored in the 1970′s by an Irish American, John Gorman, who made his fortune from a cigar plantation in Ecuador.  Mr Gorman donated the bell which is now at Doolin’s Catholic Church from his plantation. The castle remains in Mr Gorman’s family to this day.