St Brigid at the Cliffs of Moher

St Brigid is probably the best known and most beloved Irish saint after Patrick. She was an Irish nun, abbess and founder of several convents. Her feast day, St Brigid’s Day, February 1st, is also the first day of spring in Ireland. This can been connected back to Celtic, pagan traditions in Ireland, as Imbolc, the pagan festival of spring was celebrated on February 1st and marks the transition from winter to spring. The celtic goddess of spring was called Brighid and as frequently happened the two traditions merged and “Brighid the pagan fire goddess” became “St Brigid”.

The Tradition of St Brigid’s Cross

Brigid  was well known for her generosity to the poor and her healing powers. One of the best known stories is of her visit to a dying pagan chieftain. While she prayed, she plaited rushes into a cross. The chieftain heard her account of the cross as a Christian symbol, and was converted and baptised before he died.
It is still customary on 1 February to plait Saint Brigid’s Crosses. It is believed that hanging a Saint Brigid’s Cross from the ceiling or the roof itself is a sure-way to preserve the home from fire.

Another tradition associated with St Brigid is the Brideog doll. This tradition was very strong on the Aran Islands and in the West of Ireland up to about thirty years ago, however it is still going strong on Inis Oirr and it is probably the last place the tradition lives on.  Here are some photos from January 30, 2015 on Inis Oirr, and Inis Oirr resident, Una McDonagh explains the ritual:

The people of the house welcome St. Bridget in and each member is handed the Brideog in turn to bless themselves with her. The head of the household then pulls a little straw out of the doll to make their own St. Bridget’s Crosses.  These they hang up in the house and in the stables to protect both the family and the animals from disease and from fire.

St Brigids Well, Liscannor – next village to the Cliffs of Moher

There are many holy wells associated with St Brigid throughout Ireland. One of her most famous wells is located in Liscannor, just a mile south of the Cliffs of Moher. It is a sacred space where there is a statue of the saint in a small grotto beside the well. Many still make the pilgrimage here on her feast day, February 1st, when mass is celebrated.
The well is very easy to find – turn left out of the car park at the Cliffs of Moher and on the right hand side you will see the statue of Brigid in her glass case surrounded by a low stone wall.
There is also a special festival at the Cliffs of Moher Visitors Centre to celebrate St Brigid’s Day

A Very Special Brigid from Doolin

The name Brigid remains a popular girl’s name in Ireland and is used in various forms – Brigit, Bridget, Bridgit, Bríd, Bride, Bea and Biddy. It is a special name to the Garrihy family (4 of whom are the directors of Doolin2Aran Ferries) as their beloved mother was also a “Brigid” affectionately known as Biddy. The “Jack B”, one of the Doolin2Aran Ferries ships, was named after Biddy and her husband Jack Garrihy. 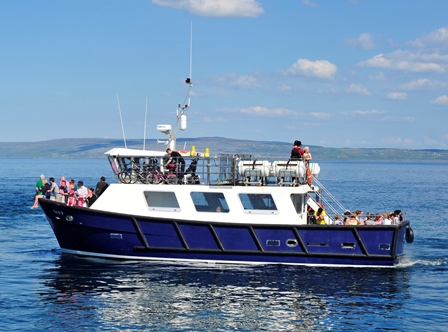