Galway Day Tour to the Aran Islands & Cliffs of Moher

The Galway day tour is one of our most popular day trip options. Working with our bus partner, the Wild Atlantic Way Day Tour, it combines the best of both worlds with a visit to the Aran Islands, a boat trip below the Cliffs of Moher and a visit to the Cliffs of Moher Visitor Centre. The tour departs from Galway by bus, with over 30 convenient hotel, hostel and B&B Pick-Up Points. Book your trip here!

From the perspective of 3 young travellers…

Written by our intern Niamh! 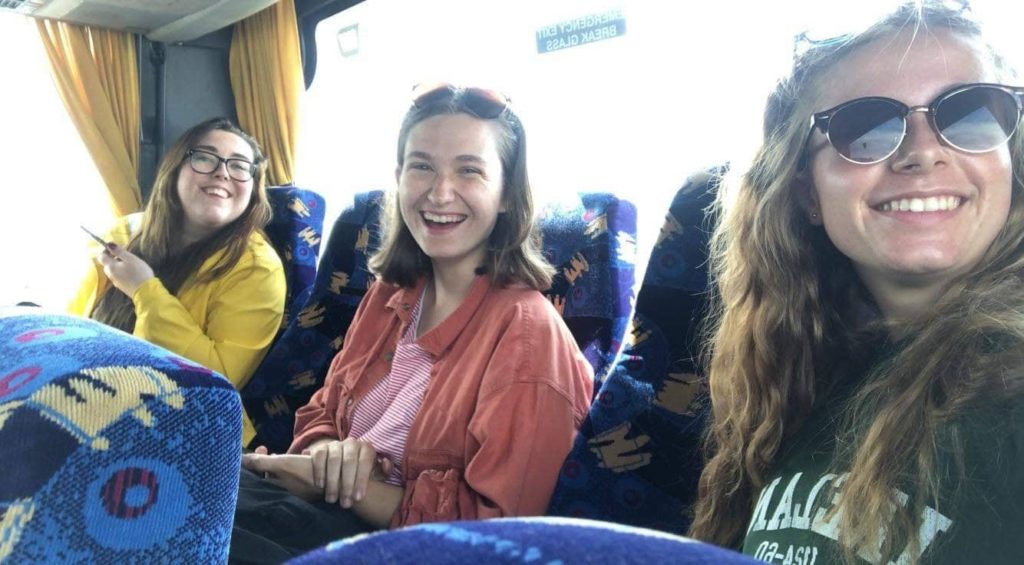 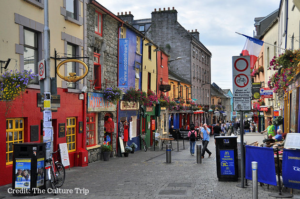 On the Rocky Road to Doolin

Rain pattered lightly against the window of the little B&B room as we slowly awoke from underneath the heavy blankets. Rossa House Bed and Breakfast looked as if it was taken straight out of a Lewis Carroll novel – random trinkets that had obviously been collected over years of accumulation were dotted around the house. Perched on the shelf at the top of the stairs were four perfectly painted china dolls and above them a mismatched set of ornately decorated plates hung on the wall. A fat bundle of keys that didn’t look like they would unlock anything in this century rested on the hall dresser. We hauled ourselves out from beneath the burrow of blankets, still blurry-eyed from both the thralls of sleep and a night out in Galway city.

Opening up the curtains to see the rain drizzling down was admittedly disappointing at first, though hardly surprising – this is Ireland! But that initial feeling was quickly shaken off in exchange for excitement for the day ahead. After filling up our tender bellies with eggs, toast and multiple cups of coffee in a breakfast room that featured a human-sized Oscar statue, we said goodbye to our lovely hostess Valerie and headed up to towards the Wild Atlantic Way coach with our bus driver Raymond. A proud Connemara man, Raymond was full of charm and had a story for pretty much anything – once, he told us with a hearty laugh, he had let two tourists camp out in his field only to wake up the next morning to the sound of their screeches from being chased by the cows that his father had let in the night before, unbeknownst to him. As we travelled down the narrow country roads, he would have a story for every rock and ruin, pointing out obscure features that would have otherwise gone unoticed and revealing the amazing story behind it. A cliff with an old man’s face, a famine road, a martello tower – he had a story for them all. In the pauses between, Raymond gave his recommendations of what to do on the island – seafood chowder with a pint of Guinness was a firm favourite. 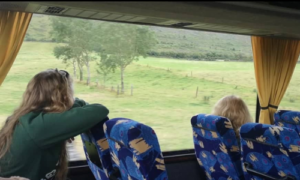 It was easy to slip into an entrancement by both Raymond’s anecdotes and the passing scenery. The slight mist brought out the green in the land, and the unimaginable depths of the ocean. At one point in the journey, it was hard to tell whether we were driving on land or sea. As the bus drove through the Burren, I thought it looked like a country of giants, with massive boulders parked in the middle of a field. Sure, how else would they have got there?

Voyage to the land that time forgot

Once we got to Doolin Pier, we soaked in the energetic atmosphere of the familiar hustle and bus­­tle of people with somewhere to be. The briny smell of the sea filled our lungs as we walked down to our boat. The Star of Doolin sat proudly on the dock, ready to transport us to a land lost in time. After being kindly helped onto the boat by the Doolin2Aran crew, we were off. Something about that liminal space on the water between the mainland and Inis Oírr felt quite unearthly, as if we were crossing from one world into another. Soft waves lapped at the sides of the Star of Doolin as she cut steely through the water. It was quite easy to just sit back and watch as the mainland slowly melted into the horizon, and all the worries and troubles that came with it.

As the island slowly materialised into view, it was just as spectacular as we had imagined. Small boats bobbed on the mirror-like sea, the scent of salt and sand wafted through the air, and a seagull’s cry was heard overhead. We had arrived in paradise.

Cast under the island’s spell… 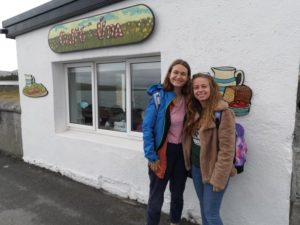 Once we had docked at the pier, our hungry bellies led us straight up towards Caife Úna. There we were greeted by the lovely Úna and a warm aromatic blast of coffee beans and baked goods. The inside was bright and cheery, much like its owner. After we had satisfied our sweet tooth with a cup of tea and a fat slab of cáca milis, we left behind the cozy café and headed towards Tina’s tractor wagon for a gander around the island. Having grown up on Inis Oírr, Tina was full of stories about both the island and the people that lived there. She explained how no one was allowed to build on the south of the island so as to preserve the landscape. Eight years ago however, she added with a smile, during the long winter season, a shed had appeared on top of a hill on the south side. One farmer had hand-built the shed overnight to keep hay for his cattle. His reason was quite simple – he was bored.

As we drove further along the winding road, we stopped by the iconic Plassey shipwreck. The slight mist only added to the ship’s mystique and its exposed rusted hull betrayed the many years it had endured by the shoreline.

Once we got off the tractor, we followed our noses towards the wafts of freshly caught fish and salty chips coming from the food shacks by the beach. Standing under the coverage of the shack, we filled our bellies with hot food and warm laughter at the antics of a local pony & trap rider Stiofan (Stefan) who had struck up a conversation with us.

It was with a slightly sorry air that we wandered back towards the pier, sad to leave this island paradise but not without the feeling of pure bliss of having spent a wonderful afternoon on the land that time forgot.

Towards the Sea Giants… 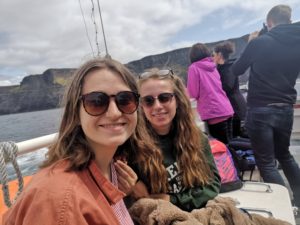 Waving goodbye to the island shores, we sailed ahead towards the looming Cliffs of Moher. As we passed by the rugged coastline, the land grew increasingly taller until it towered above our heads. Craning our heads, we gazed up at the cliffs to marvel at their sheer magnificence. Tiny white blurs darted back and forth from their perches to dive into the sea depths below, identifiable only by the sounds of their cries as seabirds. O’Brien’s Tower sat perched at the cliff edge, its immutable gaze staring out at the vast horizon. The sea stack looked as though it had been raised from the depths by the Irish sea god, Manannán mac Lir, himself. It was easy to see how so many legends surround them, these sea giants with their rock armour standing protectively at the edge of the Atlantic Ocean. A noticeable hush took over the boat as we took in the incredible spectre, and lasted well until the cliffs were at our backs and we were on our way back to Doolin.

The edge of the world

By the time we had arrived back at the pier, the boat had returned to its former excited chatter. We headed up towards the bus where Raymond was waiting patiently. Once everyone was back onboard, we were off towards our last stop of the tour – the Cliffs of Moher visitor centre!

Experiencing the cliffs from below was absolutely breath-taking, but it was just as incredible standing on top. It really did feel like we were standing on the edge of the world, staring out at the infinite blue with only the Aran Islands obscuring the endless horizon.

What an incredible end to the perfect day… 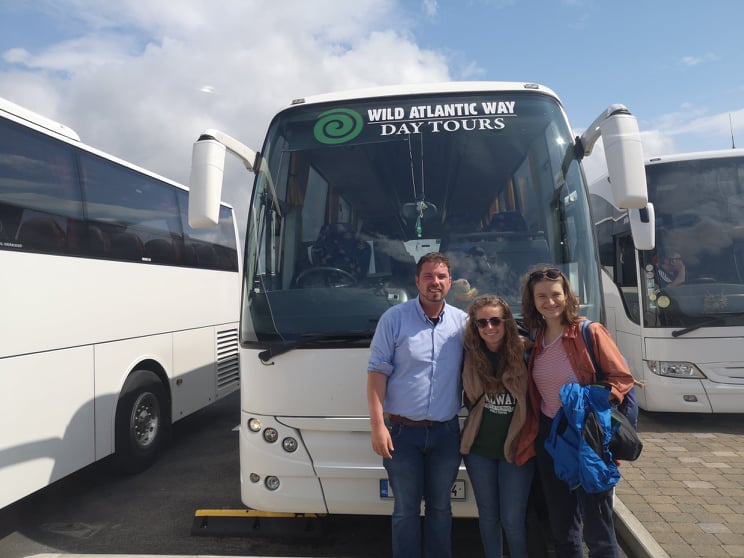 To see all of what we got up to for yourself, check out our vlog!

If you’re interested on taking a Galway day tour to the Aran Islands and the cliffs yourself, click here to make your booking!

Check out this great list of “34 Things To Do in Galway” – certainly plenty to keep the whole family entertained!

PrevPreviousWhat is the Summer Solstice?
NextFirst Boat trip to Aran Islands from Doolin – almost 100 years ago!Next
This website uses cookies to improve your experience. We'll assume you're ok with this, but you can opt-out if you wish.Accept Read More
Privacy & Cookies Policy