It is no surprise then that China is the biggest outbound market in the world; foreign travel is now one of their ultimate status symbols. According to Niall Gibbons, chief executive of Tourism Ireland, approximately 120 million Chinese are travelling abroad in 2015. This is a staggering increase of 110 million in 15 years – there were only 10 million international Chinese tourists in 2000.
In light of these massive numbers, the 40,000 Chinese who visited Ireland in 2014 looks pretty insignificant. However as Mr Gibbons, points out that is a 122 per cent increase on 2012 (18,000 visitors). Tourism Ireland currently has offices in Shanghai, Beijing, Guangzhou and Chengdu.

On August 18 2015, a 45 minute programme called “Glamorous Ireland” aired on China Central Television (CCTV-4). This is the country’s main station and it is estimated that the programme has been viewed by 80 million Chinese people both within China and abroad. Their television crew was in Ireland in May to film at locations around the country. 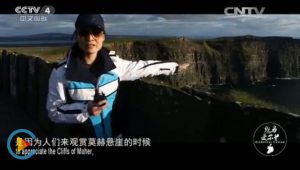 Its focus was mainly on culture and society in Ireland, and filming took place at the Cliffs of Moher, Blarney Castle and Skellig Michael and other beautiful locations.
The programme describes the “black cliff which looks like it has been cut by knife and axe and stand upright in the cold sea water.”

Niall Gibbons, the CEO of Tourism Ireland, said, “The ‘Glamorous Ireland’ documentary is the kind of publicity that money simply could not buy and is an excellent way of showcasing the island of Ireland to potential Chinese holidaymakers.

We were delighted to be part of this showcase for Ireland (you can see footage from the cruise at 35:00 minutes where the Chinese commentator, Fen Haiyun, is explaining where the Harry Potter cave is and the bird life at the sea stack.
The Cliffs of Moher Visitors Centre and Doolin village and our musical heritage are also featured. Click here to view the programme

The Chinese are coming!
(to Ireland we hope..)

In 2012, the then Chinese vice president Xi Jinping came to the Cliffs of Moher during his state visit to Ireland. During his Chinese New Year address in 2014, now president Xi Jinping had prominently displayed the photograph of himself kicking a football at Croke Park. Such PR coups, along with Riverdance’s enduring reputation, do a lot to boost Ireland’s standing in the minds of would-be Chinese tourists. Niall Gibbons has stated that he is “confident we will reach the target of 50,000 Chinese visitors to Ireland by 2017.”

We would be only too delighted to welcome Chinese visitors on our Cliffs of Moher Cruise.  But as one of our team, John Fitzgerald commented, “Let’s hope all 80 million of the Glamorous Ireland viewers don’t decide to come at the same time…” (we might need a bigger boat).