The Ultimate Guide To Cliffs of Moher Puffins

Puffins are a huge attraction on the Cliffs of Moher Cruise, and it’s no wonder, they really are such cute, colourful little birds. We thought it was about time to tell their story.

The Cliffs of Moher are home to over 7,000 Puffins from the months of April to late July, during their breeding season. For the rest of the time, the birds live on the sea. Recent research from the Coastal and Marine Research Centre in Cork has shown that Puffins can travel across the entire Atlantic as far as Canada when they leave Ireland. That is some going for tiny little wings!

Love stories begin … at the Cliffs of Moher

Did you know that Puffins mate for life? Yet another reason to love them.
In early spring, when they arrive back to the Cliffs of Moher, their striking bills are even more brightly coloured than usual and there is lot of courtship display going on. They have to look their best, y’know, they haven’t seen their mate since they left the cliffs last year.. Then after a bit of spring-cleaning in the burrow, the same one they always use (awww), it’s down to business 😉

The pair will produce a single offspring, and both parents will incubate and feed the chick. The word Puffin probably comes from the baby bird, as they really do look like little puffballs with a beak and feet.
The chick is fattened up on a diet of sand eels until it reaches the ripe old age of six weeks old. Then the poor little fella is abandoned and left to fend for itself. After about a week of starvation when it realises that the food supply has been cut off, the chick will crawl out of the burrow and venture out to sea. Tough parenting eh..

How Big is a Puffin?

A Puffin is usually no more than 10 inches tall and weighs about 500 grams. 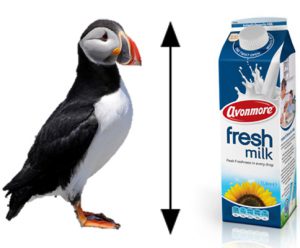 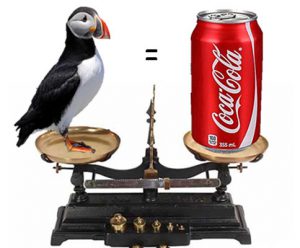 How Fast Can They Fly?

A Puffin can fly 48 to 55 mph (77 to 88 km/hr), often low over the surface of the sea. The bird beats its wings rapidly to achieve this speed reaching up to 400 beats a minute.  The wings can move so fast that they become a blur, giving a flying Puffin the appearance of a black and white football 🙂

Their short wings are adapted for flying under water. They can dive down to 60 metres and stay below the surface for over 2 minutes. While underwater, the Puffin swims by using its wings to push it along under the water almost as if it were flying, while using its feet as a rudder.
Puffins feed on a wide variety of marine life, taking fish, worms, molluscs and crustaceans. Unlike other seabirds, they can hold several small fish cross-wise in their beaks at a time, sometimes up to 10 or 12, which allows them to take longer foraging trips. And when you think how tiny they are, this is even more remarkable!

Young Puffins and Puffin eggs were once considered a delicacy in Ireland, thankfully this is no longer the case.
Their main predator is the Great Black Backed Gull who occupy the higher slopes of the cliffs behind their burrows.
Puffins are very vulnerable to adverse changes in the environment because its breeding population is concentrated on a small number of sites. In Ireland, these are mainly the Cliffs of Moher, Skellig Michael and the Saltee Islands. The main threats to Puffins are the changes in distribution and numbers of small fish such as sand eels.
Uncontrolled tourism can be harmful to Puffin colonies because they need solitude to breed. People who get too close may scare off parents from their duties of feeding their chick.
As long as tourists stay on boats at a safe distance and do not disturb the Puffins, they can easily enjoy watching a colony during the nesting season. And as keen members of the Burren Ecotourism Network, we couldn’t agree more.

So the moral of the story is…Keep your distance, and take a cruise!

You heard it here first folks, the best way to respect our Puffins is to watch them from a safe distance on board a Cliffs of Moher Cruise 🙂 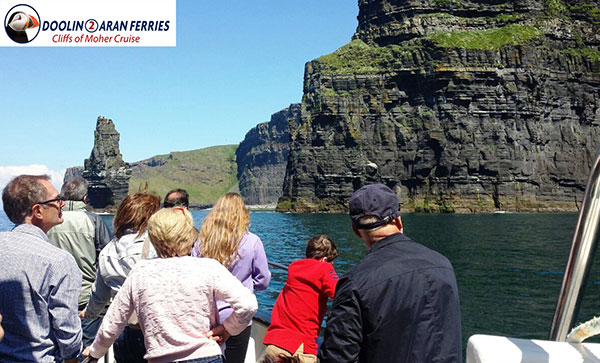