Celebrate Halloween, An Ancient Irish Tradition, on the Aran Islands

Did you know that Halloween was invented in Ireland?

The origins can be traced back 2,000 years to the Celts. The Celtic festival “Samhain (sow in) celebrated the end of summer and the start of winter. The Celts believed that on October 31, the boundary between the worlds of the living and the dead blurred allowing ghosts of the dead to return to earth to wreak havoc, damaging crops and livestock. Masks and costumes were worn to try and mimic the evil spirits or pacify them. When Christianity came to Ireland, November 1 was designated as “All Saints Day” (or “All Hallows Eve”) which was shortened over time to Halloween.

When the Irish and Scottish emigrated to North America in the nineteenth century, they carried versions of the Celtic tradition with them. Traditional activities include trick-or-treating, bonfires, Halloween costume parties, visiting “haunted houses” and carving jack-o-lanterns. 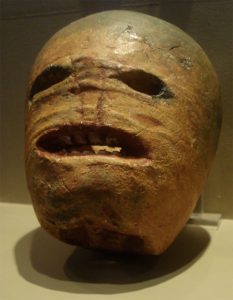 Legend has it that, in the 18th century, when an Irish blacksmith named Jack was denied entrance to heaven, he made a deal with the devil. As Jack was condemned to wander the earth forever he asked the devil for a little light and the devil gave him an ember of coal placed inside a turnip. So the story goes that on Halloween, Jack, a damned soul, wandered about frightening the people of Ireland. People carved faces into turnips, lit them with candles and placed them on windows sills to ward away his evil spirit. When the Irish came to America they found turnips hard to come by, but there were plenty of pumpkins, so a new tradition was born!

As with many of Ireland’s traditions, Halloween on the Aran Islands is very true to its origins and things can get a little bit spooky.. Most of the island’s inhabitants dress up with costumes, masks and gloves to hide their identity from their neighbours – not an easy task on an island where everyone knows everyone! Not a word is spoken for the entire day until midnight. In the bars and hotels, drink and food orders are written on slips of paper and passed to the waiters. Drinks are taken through straws so the islanders can avoid lifting their masks and revealing their faces. People dance with each other in complete silence and complete disguise until the night’s end. 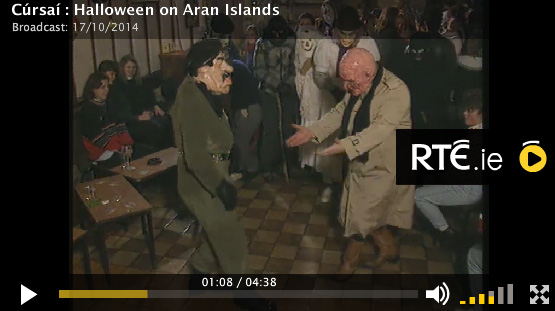 This video shot in 1992 shows “Sadam Hussein” dancing with “Hellraiser”

So, to truly celebrate the traditions of Halloween (complete with our “new” tradition of carving pumpkins and not turnips) you must come to Ireland and join in the festival!