The Inis Mor Patrun Festival is an annual three-day summer party every June on Inis Mor, the largest of the Aran Islands, which celebrates the patron saint of Inis Mor, St Enda. This family fun event consists of all kinds of sport, including currach and hooker boat racing, tug-of-war, art and sandcastle competitions, and a road race on the island.

The island games are very entertaining to both watch and take part in. Serious bragging rights are at stake, and competition between the islanders can be a matter of family pride.

Here are 5 fun facts to help you make the most of the festival!

St Enda of Aran was regarded as one of the patriarchs of Irish monasticism. He founded a monastery at Killeany (Cill Éanna) on Inis Mor in the 6th century. Enda chose the lonely, unproductive Aran Islands as suitable for his ideal of the monastic life. The Aran Islands were a very popular pilgrimage, due to the hardship required to get there in the first place, so suitable penance was endured en route.

Men (and women) of Aran brave the Atlantic ocean for the annual inter-island currach races which take place in what can be very tricky conditions with a stiff breeze blowing. These boats are specially made racing boats, unlike the heavier currachs used by fishermen around the islands. They ride high in the water and as they have no rudder must be steered by the oars. This presents a tremendous challenge to those on the oars as the breeze can push the high-prowed boats quickly off course. Winning in a racing currach is all about skill, stamina, strength and a measure of good luck. Fair play to them.. 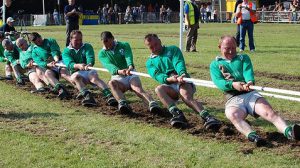 Time honoured feats of strength like the Tug of War require collective timing whereby the entire team must act as one and in the same moment, and it is a pleasure to see a professional team in action.
Teams from the mainland such as Castlegar in Galway have taken part in Patrun. The biggest member of the team is normally at the end of a tug of war rope, and known as the anchor man. Usually, such individuals were heavy or well set. However, amateurs haven’t a chance, even if they are strong and heavy!

Gone are the days when sandcastle competitions were about building any old castle –there are amazing creations to be seen in this event, and techniques are refined year on year. Here’s a tip for wannabe sandcastle sculptors – be sure to add lots of water to the sand and stamp on it to get the air out 😉 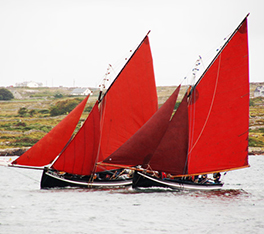 The Galway Hooker is a beautiful and very unique ship developed for the strong Atlantic seas. Traditionally, the boat is black (being coated in pitch) and the sails are a dark red-brown.
It is easily identified by its sails which consist of a single mast with a main sail and two foresails and when there are a number of hookers racing it is a spectacular sight to behold.
Our vessel, the Happy Hooker was named for them, mind you that name can raise eyebrows for the uninformed….

Book your boat trip to Inis Mor for Patrun, the craic is only mighty!

PrevPreviousSt Brigid at the Cliffs of Moher
NextGlamorous Ireland TV show in China features Doolin2Aran FerriesNext
This website uses cookies to improve your experience. We'll assume you're ok with this, but you can opt-out if you wish.Accept Read More
Privacy & Cookies Policy