One of Inis Oirr’s oldest residents, Thomas O Conghaile, who was in his 101st year, passed away on February 17, 2018.  Eugene and PJ Garrihy joined the family and hundreds of well wishers at the centenarian funeral mass and burial in Inis Oirr’s island cemetery on the Aran Islands.  Thomas’s family has been running Tigh Ned’s pub on Inis Oirr since 1897. 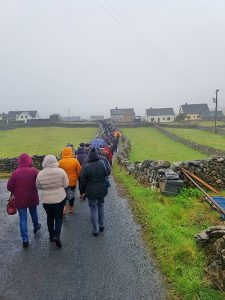 Thomas, known as Peter Mhein, was born just 20 years after J.M. Synge visited Inis Meain.  His was a very different world to ours, and even more so living on a remote island off the west coast of Ireland. Imagine what he must have thought of our world of smartphones, drone cameras and online shopping…

Eugene remarked – “It was an honor to be there to represent our family and in particular our deceased father, Jack Garrihy, who was a life long friend of Thomas (Thomas was born in 1918 and Jack was born in 1920). The bond between Doolin and the Aran Islands which is still there today is due in no small way to the friendship between Thomas Peter Mhein and Jack Garrihy going back to 1940s.”

hile some traditions have not stood the test of time, an island funeral is one tradition that seems to be timeless.  There are many similarities between Thomas Peter Mhein’s funeral in February 2018 and that of Joe Mhairtin O Flaithearta in June 1965, which was captured in Bill Doyle’s beautiful book, “Island Funeral“.

“Thank you to the Conghaile family for your kind hospitality on Monday”, said Eugene. “May Thomas Rest in Peace (Ar dheis Dé go raibh a anam dilís)”.