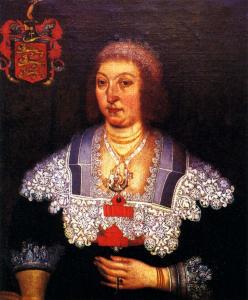 Maire Rua (or Red Mary) McMahon of Leamanagh Castle, in the Burren in Co. Clare is one of Ireland’s legendary femme fatales, cut from the same cloth as Queen Maeve of Connaught and Grace O’Malley, the Pirate Queen.
In fact and in fable Maire Rua was a formidable woman and certainly a force to be reckoned with. She lived at Leamanagh in the 17th century with her (at least) 12 children from her (at least) 3 husbands. It was her inherited wealth from the death of her first husband that enabled her to build what must have been one of Ireland’s finest tudor mansions in the 17th century.

Myth and historical legend have combined to give Maire Rua a ferocious reputation; however, some facts can be substantiated in State records.

When her mortally wounded husband, Conor O’Brien, was being brought home she is said to have shouted from the castle tower: What use have I for dead men?” After he died, she dressed in her best finery, went to Limerick and married John Cooper, the first Cromwellian officer who asked her, preserving her children’s right to her properties. 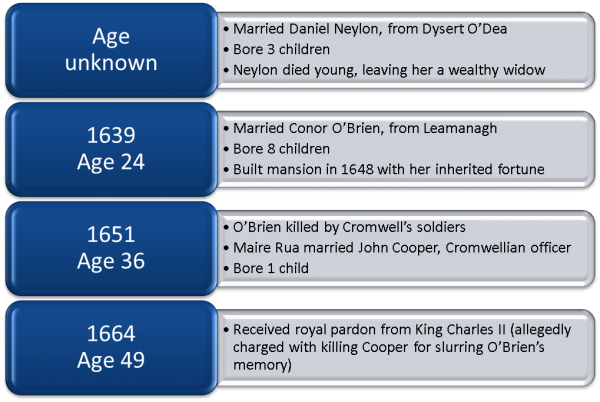 The Legends of Maire Rua

The legends are fantastic stories! Apparently after John Cooper died, she had 25 husbands, most of whom she killed off. One legend says she threw one husband out a castle windows; another tale recounts how she forced one poor spouse to ride his horse over the nearby Cliffs of Moher. Any male servant who displeased her was hunng from the castle tower by the neck.  It is said that the poor female servants were hung by their hair – and she cut off their breasts…

There are 2 versions of her grizzly end; both agree that her enraged enemies entombed Maire Rua in a hollow tree, where she starved and her gruesome death has condemned her to haunt the grounds for hundreds of years. Where the stories differ is that she was either buried in a tree at Leamanagh Castle or at Carnelly, near Clare Castle, known as a Druids altar.
But there have been claims of a red-haired ghost at both places, so maybe her misdemeanors were enough to warrant her 2 haunting grounds…

Learn more about the gorey goings of the bauld Maire Rua at Lemeanagh Castle on the Clare Library site.

Our 2020 sailing season is now closed.

We would like to thank all of our passengers for sailing with us this summer, and special thanks to our fantastic crew and staff for looking after our passengers so brilliantly. You did us proud!

We look forward to having you all on board in 2021. Stay Safe Everyone