The Plassey – The Famous Shipwreck on Inis Oirr

The iconic Plassey shipwreck is known all over the world.  Here on the island for the past 50 years, this “blow-in” has become an integral part of the community on Inis Oirr.
She also features in the opening credits of the popular comedy series Fr Ted and is a “must see” for visitors to this, the smallest of the three Aran Islands.
The boat went down in 1960, and Mike Tobin is the only member of the Plassey crew still alive. He was back as the Guest of Honour on Inis Oirr for a special night in Aras Eanna last summer – the 50th anniversary of the shipwreck.
The Plassy’s travels recounted
“About 1954 was my first time on her,” recalls Mike. “It’s kind of sad to be inside in her like this, though.  I was very found of the ‘oul Plassey, because at that stage of my young career at sea, she went to very exotic places. She was in Italy; she was in the Canary Islands, Greece, Iceland, Angora and South Africa. She went from Helsinki over to Leningrad – at that time, its St Petersburg now. We never thought she’d end up in Inis Oirr of all places… but she’s there now…”
The night of the storm
Mike brings the Plassey to life with his stories from the night she went down.  “I remember the 8th of March, 1960 like it was yesterday”, said Mike. “We were too far to the north of our course, and closer to the island than we should have been, but we didn’t realise it in the bad night and the wind. We hit the Finnish Rock initially at 10 past 5 in the morning.”The Plassey’s flare lit up the sky and the islanders were alerted to the danger and immediately ran to the scene with the rescue equipment.
“The first we saw of people on the island was around a quarter to 8 – daybreak, we were very happy to see them!  They had only 3 rockets (to launch the ropes for the Breeches Buoy), they fired the first 2 but the wind was so bad it took them away, and when they fired the next rocket it stuck!  Only for that, that would have went as well, because of the way the wind was blowing.”
Thanks to the islanders’ courage and bravery, the entire crew was brought to shore safely using Breeches Buoy to hoist them in, one man at a time.
“Later, at the tail end of some hurricane, the Plassey was lifted bodily from the position she was in, and shoved up there beyond the hide tide in one fell swoop”, Mike continues. “To think that she was lifted from over there, and she full of water, and pushed up there, it would tell you the force of the seas that was around here at the time.”
50 years later at Aras Eanna 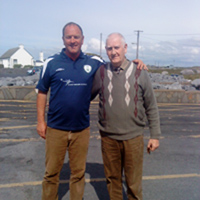 Mike and his wife travelled with us over to Inis Oirr for the commemoration in the summer of 2010. There was a large crowd in Aras Eanna that night. Mike was pleased to see some of his rescue team, including Ruairi O’Conghaile who runs Tigh Ruairi’s pub and guesthouse.
Mike was asked to demonstrate how to use the Breeches Buoy.  He had to step into the leggings part which is attached to a lifebuoy. “Well I tell ya, the wind was up me! You had to go over the side of the ship, at the bow, and you went straight down into the water, and you were being turned this way and that way, and then your legs were hitting close to the rocks and then you were going over and under… but that’s how we got out!”
“Were you frightened, Mike?” someone asked.  “Yes”, says Mike.  “I don’t think anyone had to wash shorts after that, I think they were all thrown away..”