What is the Summer Solstice?

Midsummer is a magical time to be in Ireland, and many of our international visitors are in awe of our long, long days of summer! Midsummer festivals and bonfires have been a tradition in Ireland since pagan times, as the Celts believed fire to symbolise the power of the sun. Midsummer continues to thrive here with festivals held to celebrate the Summer Solstice on June 21st and St. John’s Eve on June 23rd.

What is the Summer Solstice? 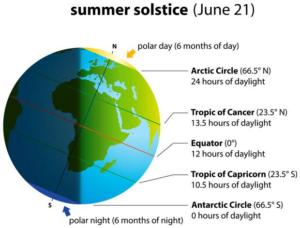 The Summer Solstice falls on June 21 in the Western Hemisphere and is the longest day of the year, as it is the point of the year when the sun shines the longest. At this time of year there’s no full on darkness. The darkest it gets is a period known as astronomical twilight. Astronomical twilight is considered dark enough for stargazing, and luckily for you Clare is spoiled for choice for amazing stargazing locations! With the Burren and its wide open landscape, the Wild Atlantic Way coastline and of course, the Cliffs of Moher, which when illuminated by starlight looks like as if it emerged straight out of a fairytale.

The importance of the Summer Solstice to the Celts

During the Celtic pagan times, life was governed by the movements of the sun, and therefore the Celtic calendar celebrated these movements, as they realised the importance of it for their very survival.

The summer solstice was one of 8 Celtic festivals celebrated throughout the year, as it was believed that was when the power of the sun was at its highest. It was seen as a time to banish evil spirits, through the light of the sun, symbolised through bonfires. The summer solstice was seen as a time of change, nature, and new beginnings, and it was heavily associated with fertility. 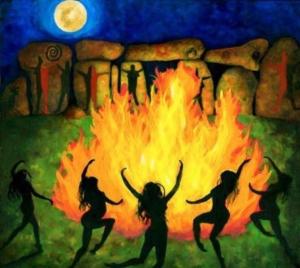 In order to banish any evil spirits that might harm their crops, the Celts would light bonfires, where they would sing, dance and feast. It was also customary for lovers to clasp hands and jump over bonfires, as this was thought to bring luck to their relationship. Farmers would also jump, holding the belief that the higher they jumped, the higher their crops would grow.

The Crowning of the Oak King

The celebration also reflects the change in seasons. In Neo-Pagan tradition, the Solstice is also seen to mark the beginning of the Holly King’s rise to power and the weakening of the Oak King’s. On the 21st of June, the Oak King is at his strongest. Gradually his power weakens, until the Winter Solstice of 21st of December when the Holly King regains power again.

Though it was originally a pagan festival, with the belief that the fire represented the sun, once Christianity took hold in Ireland, Christian prayer was also thrown into the mix. Before the celebrations, the parish priest would say a blessing over the flames. There was often great rivalry between neighbouring villages or parishes as to who would have the largest fire!

June 23rd is St. John’s Eve, or as it is known in mainly the West of Ireland, Bonfire Night. The night would be celebrated by a large communal bonfire assembled and lit exactly at sunset by the residents of a village. In the past it was known as Tine Cnáimh which literally translates to Fire of Bones, so-called because in the past it was tradition that old bones were burned in the fire.

The bonfires were originally lit as part of a Celtic celebration in honour of the goddess Áine, associated with the sun, fertility, and protecting crops and animals. However, once the Catholicism took over Ireland, the event became linked with the birth of St John. Even still, the night is hugely connected with folklore, as the areas which celebrated St. John’s Eve often held a deep belief in the ancient pagan traditions.

The magical properties of the fire 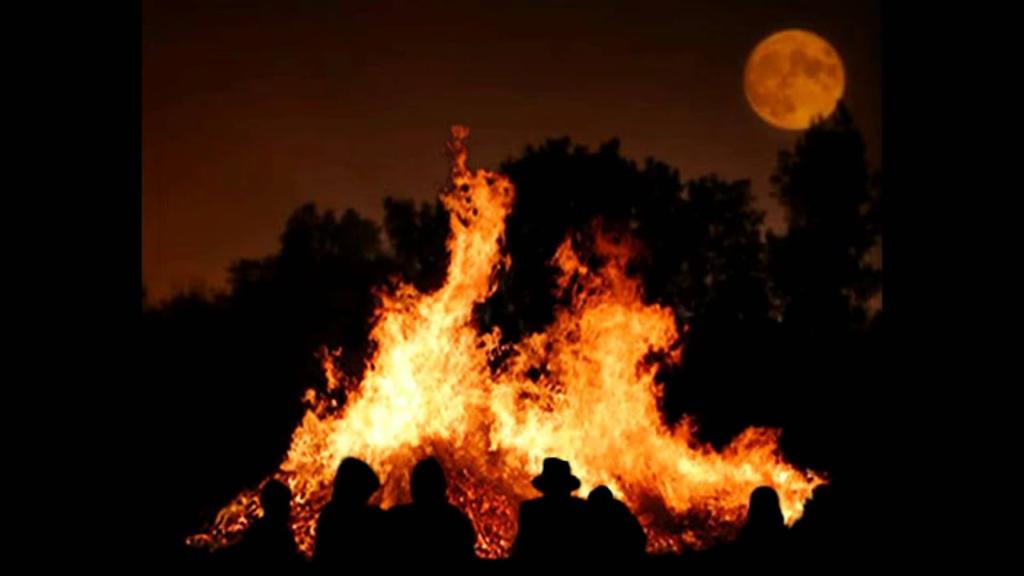 As Thomas Flanagan says in his book ‘The Year of the French’ that:

“The sun was at its highest then, and the fires spoke to it, calling it down upon the crops. It was the turning point of the year, and the air was vibrant with spirits.”

The fire itself was thought to have magical powers. One of the celebratory customs was that people would leap through the flames for good fortune in marriage, health or for a good harvest. The next morning after the dancing and celebrations were over, on St. John’s Day, farmers would spread the ashes from the fire in their fields in the hope that they would bring a good harvest and protect the land from diseases. Burning weeds in its flames was also believed to protect the fields from those specific weeds, and to guarantee the land’s fertility. Those who had just built a house, or who were moving into a new one, would bring a shovel of red hot sods to the new home so that the first fire lit there would have been started by the bonfire.

In the late 18th century, the young men of the village used to walk through the fields with lighted torches which they then casted into the fire. This was supposed to bring a blessing on the fields and protect the crops from diseases.

Things to Do for Midsummer in North Clare: