Guide to Doolin for Newcomers

New to Doolin? Here’s All You Need to Know

If you have heard about Doolin but don’t know what to expect, have no fear, we are here to help you on your Wild Atlantic Way.
This article will give you a guide to all you need to know about Doolin. It is the first in a series of articles on the region, where we will also be covering Inis Mor, Inis Meain and Inis Oirr and North Clare, so be sure to keep an eye out for other episodes.
There’s a condition called Doolin-itis, and there is no known cure. Once you visit, you will definitely want to come back, so don’t say you weren’t warned… 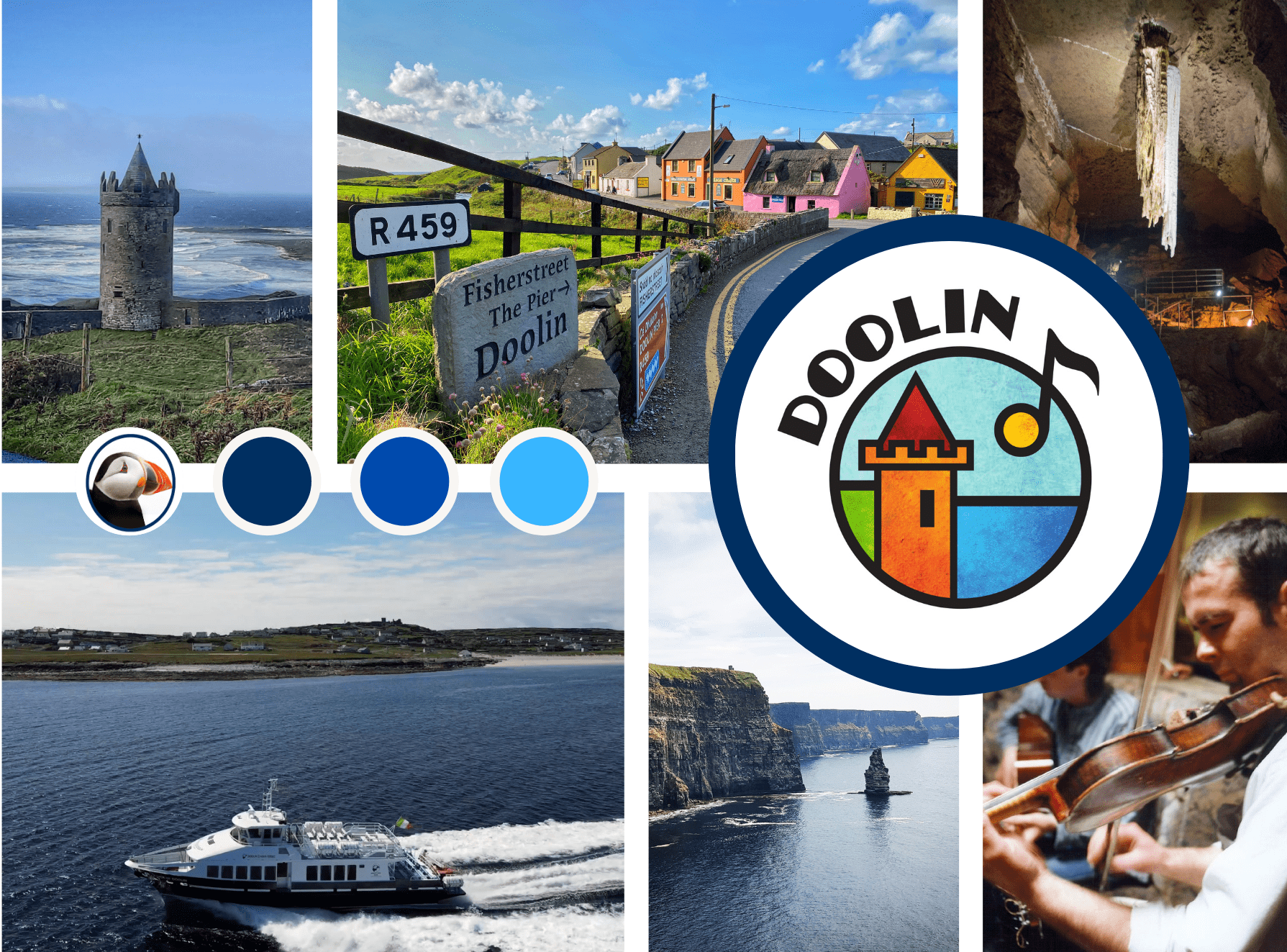 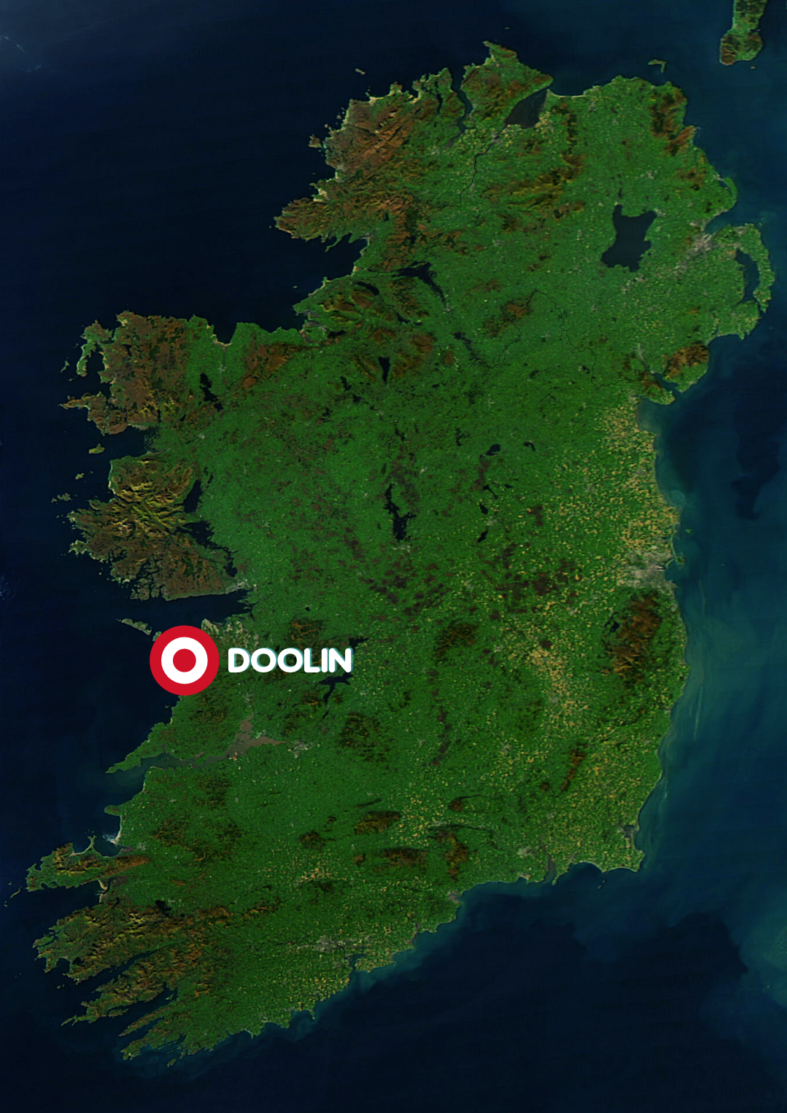 Looking at a map of Ireland, Doolin is pretty much in the middle of the west coast, on the famous Wild Atlantic Way. It is a quaint little seaside village nestled at the base of the Cliffs of Moher in Co. Clare, south of Galway and north of Limerick and Shannon Airport.

Why is Doolin Famous?

There’s somethin’ about being in Doolin…
You NEVER know what’s goin’ to happen,
or who’s goin’ to walk in the door.

Originally just a sleepy fishing village, Doolin is now a mecca for Irish music lovers. It was “discovered” in the 1970s, largely due to the popular revival of Irish folk music by groups like The Chieftains and Planxty. As John Browne, owner of Doolin Cave and local historian put it – “The pubs were beginning to fill up with these foreign people coming to Doolin just to look at a way of life, and they were having great fun in the pubs as well!”

According to Seán O’Connor from the original O’Connor’s pub family, there were also the “accidental tourists” who fell into Doolin while they were visiting the Cliffs of Moher, and then fell in love with the place and the people. In fact, some never left – Doolin residents are now an eclectic mix of families who can trace their roots back generations and a very wide selection of “blow-ins” who hail from all parts of Ireland and many parts of the world.

Take a look at what some of Doolin’s best-known characters have to say:

There are lots more Zoomin in Doolin chats in our video series playlist on YouTube.

Things to Do in Doolin 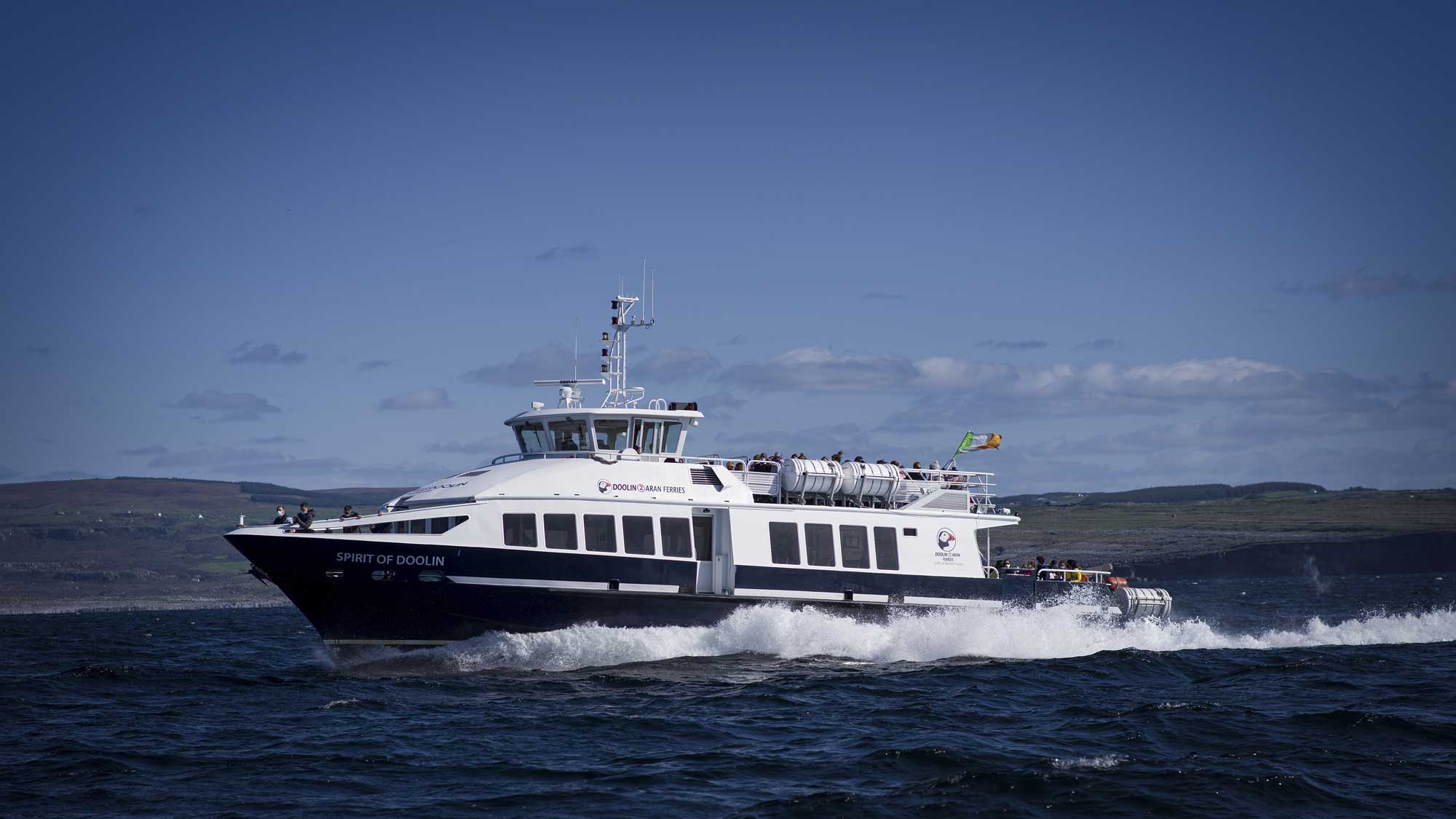 The Cliffs of Moher are second only to the Guinness Storehouse as the most visited place in Ireland and are Ireland’s most popular natural attraction. Their spectacular beauty has been drawing visitors since the 1800s, when Cornelius O’Brien built O’Brien’s Tower for tourists during the Victorian era. We are possibly biased when we say that the best view is from the sea on our Cliffs of Moher cruise, but there really is no such thing as a bad view of these prehistoric wonders.

The Cliffs of Moher Visitor Experience is about a 10 minute drive from Doolin and the best time to visit the centre is later in the day, when the sun is not so high in the sky, and the crowds have moved on.

There is a coastal walking trail from before the start of the Cliffs of Moher in Doolin to the end of the cliffs past Hags Head in Liscannor. Views from this walk are simply spectacular. The entire walk is approx 16km and would take about 4.5 hours, but it can be broken down into sections also.
Important note: Currently, conditions on certain parts of this trail are unstable and in need of repair for the walkers’ safety. It is recommended to limit walking to the repaired section which covers 1km either side of the Visitor Experience.

Doolin is located in the Burren which is a limestone region with an elaborate cave system, which has attracted cavers (or speleologists – good one for pub quizzes) from around the world. Doolin Cave is home to the Great Stalactite which is the longest free-hanging stalactite in the northern hemisphere, and there is a great nature trail and tasty cafe in their Visitor Centre. The Burren has another famous cave – Aillwee Cave, which is about a 30 minute drive north of Doolin. As well as an elaborate cave system, the Aillwee Cave also has a Birds of Prey centre and its own farmshop where the delicious Burren Gold cheese is produced on-site. 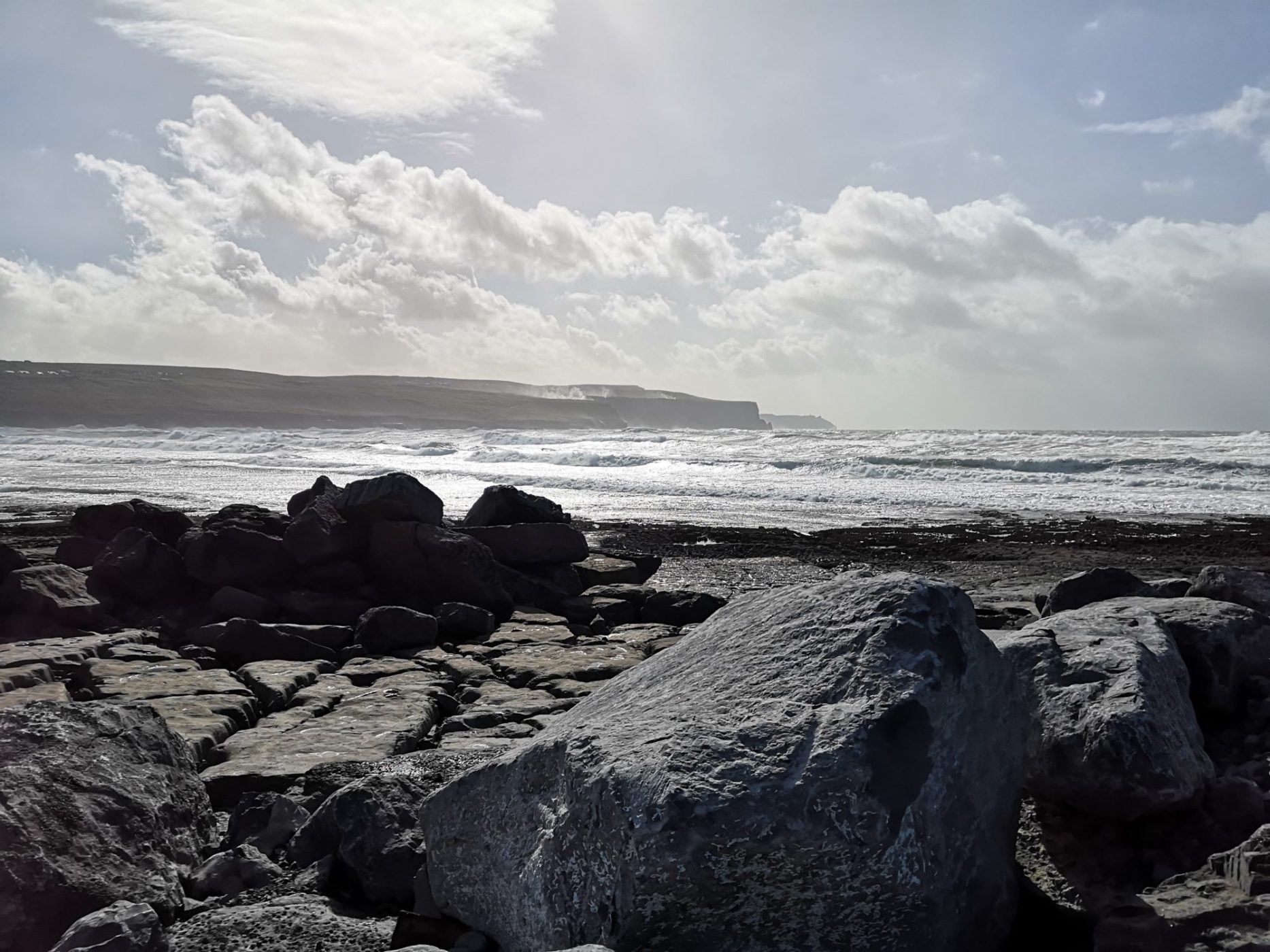 Doolin is located in the UNESCO Burren and Cliffs of Moher Geopark, one of the most coveted natural designations in the world and one of Ireland’s most uniquely beautiful regions. The Burren’s limestone plateau has been described as a “moon-like” surface, and it has to be seen to be believed. The Burren is worth exploring over several days, but first-timers can get a feel for what it is like by visiting Doolin pier, where the limestone meets the ocean.

When it comes to eating out, Doolin (and North Clare) is a Foodies Paradise. From the tastiest take-aways (try Russells Fishshop) to the creme de la creme of Fine Dining, Doolin has it all, and businesses pride themselves on sourcing local produce as much as possible. Naturally, seafood is very popular here but there is a large selection of high quality meals to choose from. The Doolin Tourism website has a great list of options. 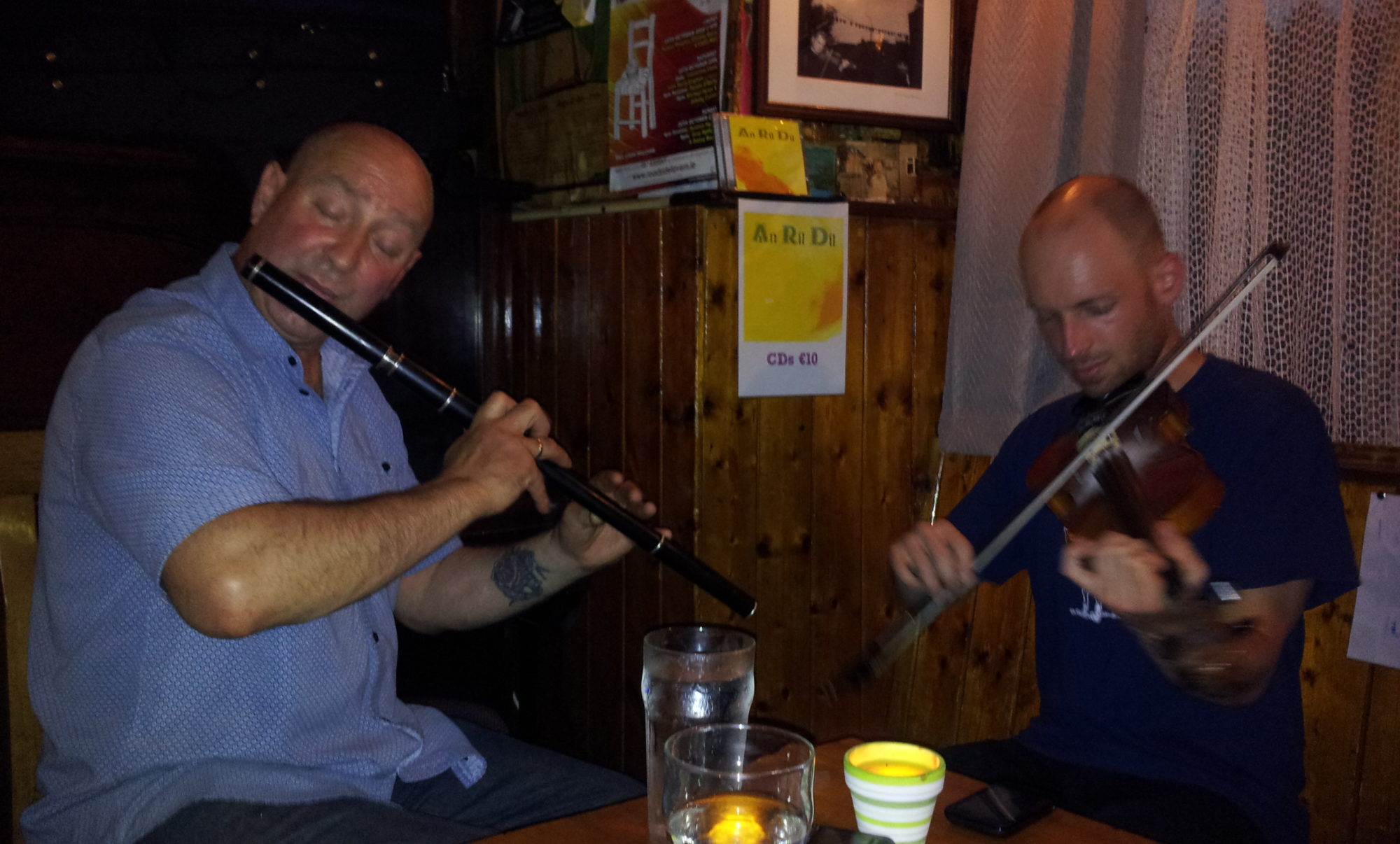 Doolin is world-famous for its traditional Irish music sessions, which are held in each of the bars almost every night throughout the year and are free of charge to all visitors. The bars host a resident band each night, and there can be other guest musicians who join the session to play a tune or sing a song – often the highlight of that visitor’s trip to Doolin!

There are five bars in Doolin, each as good as the next for foot tapping entertainment:
O’Connor’s Pub
McDermott’s Pub
McGann’s Pub
Fitzpatrick’s Bar
Fiddle and Bow Bar

There are also some smaller shops such as The Doolin Chocolate Shop and the Doolin Dingy. which has a wonderful eclectic selection of books and tunes.

How to get AROUND Doolin 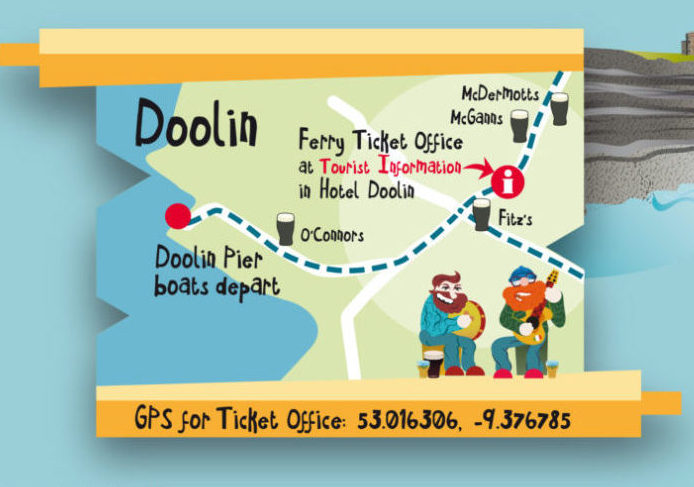 Footpaths and street lighting has been upgraded in recent years from Fitz Cross to Fisherstreet, but there are still stretches of road with no paths. When walking on country roads, remember the rule is to walk no wider than two by two on the right hand side of the road (facing oncoming traffic). Cycling is popular here, but most of our passengers drive to Doolin pier where there is a large car park available. This blog has more detailed driving instructions to get to Doolin pier.

How To Get TO Doolin 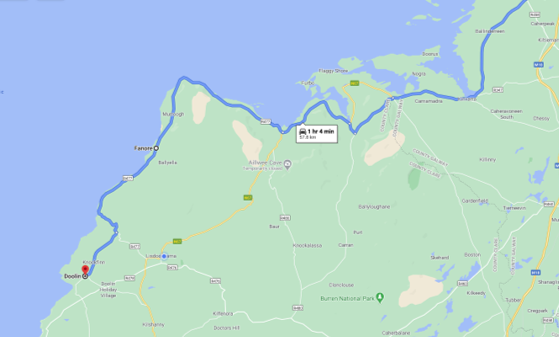 There are 2 main motorways to the west of Ireland now, the M7 (via Limerick) and the M4/M18 (towards Galway). It takes about 3 hours to get from Dublin – longer, depending on what part of Dublin and what time you actually get out of the city! By far and away the most scenic drive to Doolin is through the Burren, from the M18 to N67 to R477 with spectacular scenery of the Aran Islands, Galway Bay and the limestone rocks of the Burren along the way. However, there are a lot of twisty, windy roads on this route, so take your time!

Public transport options to and from Doolin a little more limited and take planning. There is a bus route (350) which connects at Ennis from other parts of Ireland. There is also a train station at Ennis in the same location as the bus depot.

When to visit Doolin

Doolin is busiest during the typical summer months of July and August, but it is beautiful to visit literally any time of the year. There is a traditional music festival celebrating the famous Russell brothers, a local Doolin music family which takes place on the last weekend of February, and then there is pretty much something to do every month until November. So you can come for some real peace and quiet from November to January!

Where to Stay in Doolin

For such a tiny village, there is literally every possible accommodation option open to you in Doolin. Choose from camping/glamping/motorhome sites, hostels, self-catering, Air BnB, Bed & Breakfasts, guesthouses and hotels. Again, Doolin Tourism is a great site to start your search.